Why React Native is The Future of Mobile App Development?

Giving developers the ease to build native applications, React Native definitely is the need of the hour. It is maintained and managed by technical nerds of Instagram and Facebook. The sole purpose behind the creation of such a framework was to embed a concept where developers could seamlessly build and deploy native apps with a customized experience and at a reduced cost.

No matter what type of business you are in or what kind of app you wish to deploy, react native is flexible with all. The top tier enterprises, from Airbnb to Facebook, Samsung and Tesla, all have taken a leap towards the adoption of react native as their mobile app development framework. Some consider it to be the native version of the age-old JavaScript library, namely React JS. Even though we stick to the norm, the technical features and functionality embedded within the framework is something that outstands others.

In a digitally-driven ecosystem, new technologies surface the technical world every now and then. Yet, react native never fails to surprise the developers. As an open-source mobile app development framework, react native uses JavaScript library to build and deploy UI components, which are both attractive and engaging. Evidently, React Native happens to be one of the most starred frameworks on GitHub. No wonder why billions of developers render support to the same.

Having said that, the future of React Native seems convincing enough to attract higher market share and improve its overall acceptance and popularity. In case you are still doubtful, we will help you get a better idea and agree to the statement that react native is the future of mobile app development.

Developing two different applications for different OS is a tedious task. Developers find it time-Consuming to code for the same application twice. With react native, developers can use the Same API to build an application for both Android and IOS. Meaning that the same API would work for the android app and IOS app. The application developed with react native framework induces a native-like look and feel where the same piece of code runs on all platforms. Few instances do mandate the need for different codes, yet the presence of Platform Modules automates the file to be employed. Platform Modules have this extensive feature of detecting the OS of the device and based on the above, pick the specified file extension, facilitating the development of cross-platform apps with greater ease.

React Native has a huge community of developers and bundle of components that are freely available to be used and incorporated, both of the above accounts for the reduction in an overall time of app development. With React Native, developers have the freedom to use any or all of the components to build their mobile apps. This deters the need to code every piece or every feature and so cut down the time needed to develop the app. In addition to the above, React Native receives huge support of the community which accelerates the time to market, further saving huge development time. Not to forget that react native employs components that can be used both for Android and ios applications, so developers need not build different applications for different platforms.

Every time a new version of the software is released by the developing community, users need to manually visit the app store and update their application. This is no doubt time-consuming and a lot more annoying. Imagine that a user isn't aware of the update and all of a sudden, the application stops working. Such a situation accounts for users uninstalling the app. React Native, on the other hand, involves live updates and code push. This implies that app modifications are automatically pushed to the application of all users, eliminating the need to visit the store and upgrade the app. The fact that reacts native is based on JavaScript, developers can seamlessly push updates and cope with older version problems.

It is seen that applications built using the react native framework render native-like experience. Though the performance of JavaScript apps isn't as high as the apps built using Java or Swift, the integration of React with JavaScript makes it efficient enough to build performance-rich apps. Evidently, for React Native programs, every JavaScript runs on its own thread and hence does not infer with other processes. Additionally, the components used to build react native apps are the same as that of the components of native apps. So, users can never find a difference between the user interface of react native application and the native apps.

Hot Reloading is an excellent feature present in the React Native development environment. Developers never find it tough to deploy the change. A single line of code modified and the UI changes instantly. Earlier, for every update made in the development file, developers had to indulge in the process of re-build and deploy. Definitely, it was a time-consuming process and mandated the need to repeat the processing time and again. No matter how small the change is, the developer had to deploy changes manually. With React Native, developers find the development environment a lot easier and better as compared to the previous one. They can now negate the deployment and rebuilding phase, optimizing the iteration cycle. Also, React Native enhances the learning curve as developers need to learn a single layout engine which is then used to develop both Android and IOS apps.

Call it the extremely rich development ecosystem or the presence of a wider community, react native is apparently the future of mobile app development. Though there do exists plenty of speculations and debates, one can never deny the fact that react native has plenty of features and additional functionality which adds to the popularity of framework. In case, you have been planning to develop and deploy an app for your business, investing in react native would be the smarter move. 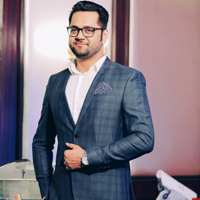 Nikhil Bansal is the CEO and Founder of Apptunix, a leading React Native App Development Company helping businesses in streamlining their processes with powerful and intuitive mobile apps. With extensive experience in iOS app development, he has established himself as a highly-focused Solution Architect and UX expert, the one who is always ready to make efforts in the direction where technology blends with lives.