Why Node JS is Considered as a Perfect Enterprise App Development Platform?

Wondering what’s all the hype around Node JS lately?

Why so many large-scale enterprise companies seem to have fallen in love with the platform?

It all started when Ryan Dahl, the creator of Node JS, demonstrated it for the first time at the first inaugural European JSConf on 8th November 2009.

Wondering what’s all the hype around Node JS lately?

Why so many large-scale enterprise companies seem to have fallen in love with the platform?

It all started when Ryan Dahl, the creator of Node JS, demonstrated it for the first time at the first inaugural European JSConf on 8th November 2009.

Ryan began the demo by explaining the problems with the way we did I/O operations prior to Node JS.

Next, he explained in in-depth technical details that how in sequential programming, the code in execution either blocks the entire process or creates multiple execution stacks if there are multiple connections.

But, with Node JS’s arrival, this problem is completely solved.

In this article, I’ll explain everything, from what is Node JS, to how it quickly gained so much popularity and why it is now considered as a perfect platform for enterprise app development.

With that being said, let’s dive right in!

What is Node JS?

Node JS is basically a cross-platform JavaScript runtime engine that allows developers to write server-side scripts in JavaScript code and produce a dynamic web page content before its being sent to the users’ web browser.

As a result, Node JS has completely transformed the old-age standards of developing large-scale applications and because of this, not only enterprise companies but popular brands & tech giants like Microsoft, Paypal, Netflix, and dozens more have also fallen in love with the platform.

Node JS advantages in a nutshell...

With so many advantages, it goes without saying that Node JS is indeed the perfect platform for developing enterprise apps.

However, let’s look at the rise of Node JS in detail and see how it quickly gained popularity in the domain of enterprise app development.

Though any platform or technology will give you reasons to use them over the others, but Node JS stands apart from all other technologies and platforms due to its modern tooling and for providing a forward-looking approach to build scalable complex applications.

For instance, America is the most enterprising country in the world, and it is also the biggest fan of Node JS technology.

According to similartech, the US has the highest number of websites built using Node JS - almost 32,000 websites currently using it.

Besides being popular in the US, Node JS is also the primary backend for lots of worldwide popular brands such as eBay and AliExpress.

Now, if you’re thinking about what made all these popular companies use Node JS in the first place, the answer’s easy.

Node JS has proven to boost business productivity. According to the Node JS survey, of all companies that adopted Node JS, only 4% said that Node JS had no impact on their business.

But, besides this 4 % of companies, Node JS has proved to reduce loading time by 50-60%, reduce application development cost by 58%, and increase an application’s performance by 50%.

In fact, both Paypal and Netflix admitted that after adopting Node JS, their startup time was drastically reduced, from being 40+ minutes to just under a minute using Node JS.

These statistics, although, already proves why Node JS is a perfect platform for building enterprise apps. But if you’re someone who doesn’t solely rely on stats and prefers to know all the details available, then we will get right to it.

Below, I have shared the top 5 reasons why Node JS is a perfect platform for building enterprise-grade applications.

5 Reasons Why Node JS is Perfect for Enterprise App Development

Each enterprise application development project comes with its own unique challenges.

For instance, most enterprise companies need to be able to store confidential data securely, track business growth, and scale at the speed of their customers’ demand.

Based on these requirements, enterprises clearly need a very robust platform to develop their application, and Node JS is definitely the perfect fit for it.

But that’s not all, by the way! Here are the top 5 reasons that prove Node JS is the perfect platform for enterprise app development.

If you’ve ever done backend development, then you might already know that most platforms usually create new threads for each new request. This ultimately uses RAM, and as the number of threads increases, it takes longer processing time.

Node JS, on the other hand, comes with event-driven and has single-threaded architecture, which is capable of handling thousands (and even millions) of connections with the highest efficiency.

Apart from this support for high performance, Node JS also provides scalability through its own set of advanced features including a cluster module that helps in load balancing.

Nowadays, things change quickly in the IT world. In fact, many times, emerging technologies start to decline before even entering into long-term support.

This, as a result, makes it difficult for both developers and businesses to build and maintain an application.

Node JS supports cross-platform development by allowing developers to reuse some of the code through platforms like Electron or NW.js.

Basically, you, as a business, can develop a desktop version of the app from your web application.

Thanks to great tools like Google Chrome Developer Tools, you can basically debug and profile your desktop version of the app and backend on the client-side app efficiently.

A cross-platform team is basically a team in which each member is equally responsible for an application’s entire lifecycle, from writing the first line of code to deployment and maintenance.

Nowadays, building a cross-platform team is common among startups, as most startups have limited resources.

That means, there is no longer a place for sentences like ‘this isn’t my job’. Everyone on the cross-platform team works towards the same goal. And since Node JS is JavaScript-based, all team members can act as full-stack developers without having to learn a new programming language.

Nowadays, most companies, especially startups, prefer building and releasing an MVP product in the beginning.

But, as soon as the application gains popularity, new features are required to be added. And before you even notice, you have a full-fledged application at your hand that is becoming difficult to cope up with.

In simple words, what was once just an MVP version becomes a complex application with time, and after a certain time, it becomes quite difficult to make even a small change.

This is one of the major concerns for enterprise companies. But, it doesn’t have to be this way always.

Thanks to the microservices pattern in Node JS, it has become quite easier for enterprise companies to make changes in their complex applications.

For example, microservice allows dividing a large application into small fragments that can be created, modified and deployed individually.

As a result, microservices helps to lower the risk of a complex application running into any troubles.

As you just saw, there are plenty of reasons why Node JS is perfect for developing enterprise applications. It not only speeds up the Node JS development process to a great extent but also makes sure to yield desired results. 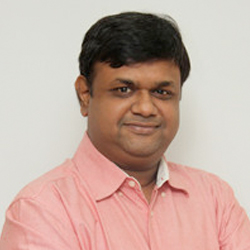 Sandeep holds the position of CEO at Credencys Solutions - a mobile app development services company. He has more than two decades of experience in creating world-class teams and driving innovation through cutting edge products. With a motto of ‘Go Digital,' Sandeep delivers an Extraordinary Customer Experience to its every client.