iPhone app development is not just about design, development and coding. There are a lot more aspects involved in the process of building an app from the ground up.

As an entrepreneur or business owner looking to get an app developed for your company, you need to more about how this whole process functions.

Here are 8 things about iOS app Development companies that you might not have known that can help you make the right decision.

Swift is a general-purpose, multi-paradigm, compiled programming language developed by Apple Inc. Swift is used by app development companies for  iOS, iPadOS, and MacOS app development. Swift is designed to work with Apple's Cocoa and Cocoa Touch frameworks and the large body of existing Objective-C code written that is written specifically for Apple products.

Generally, the understanding amongst consumers is that an iOS app development company is just a team of developers. This perception is incorrect.

This helps boost your app’s performance on iOS store as well by making it significantly more user-friendly.

Localization is a modern trend within the app development world. It allows mobile applications to target specific target markets based on demographics.

One important things to know here is that iPhone app development companies don’t do this for all app projects. Localization is done for apps with proven potential in specific demographics or areas.

Suppose you hire an iOS app development agency for an application project. Once your application is developed, you realize that it is incredibly useful for people across the globe but the app’s base language could restrict it from being used by people in other regions.

In such a scenario, you can contact the company you hired to localize your application. One of the localization strategies they implement is to translate your application into different languages.

This allows them to translate that .xml file into one or more languages extremely efficiently. As a result, your application is localized quickly and makes the process much simpler.

Translating your application into different languages can maximize your market reach. More downloads, more usage can lead to better revenue and these companies take that into account.

4) The Tools that iPhone App Development Companies Use in Their Processes.

Containerization is a strategy used in app development for automated deployment and efficient scaling of a mobile application.

It helps migrate applications seamlessly and reduces the chances of delayed delivery due to hardware failure. If such failures occur, developers can simply migrate their containers to another hardware device and complete the project without any problems in the development process.

These are some of the tools iOS application development companies use for containerization:

Kubernetes  is an open-source platform that allows mobile app developers to automate deployment, management, and scaling of containerized applications.

It creates groups out of individual containers of an application into logical units for easier management and discovery. Kubernetes is also helpful in migrating applications from in-house servers to cloud servers, which is where application development agencies store their apps in the modern day.

Docker is another such platform that allows for OS-level virtualization to create software packages called containers. Like Kubernetes, Docker is also being widely adopted in the application development process.

Apart from these platforms, iOS app developers are also using third-party hosting platforms. Long gone are the days of using in-house servers for application hosting and deployment. Amazon Web Services(AWS) and Microsoft Azure are two cloud platforms that are used by development agencies for greater scalability and performance of their applications.

IOS 13 comes with frequent reminders of which applications are using your locations and allows users to see the data that applications log from your mobile device.

IOS also has strict data protection and privacy laws that needs to be adhered to, for which iOS app development is always done with these security measures in mind so as to make applications safer to use.

In the absence of any of these considerations, iTunes store will most certainly reject your app.

6) They Develop Locked Features That Can be Unlocked Later

If you are hiring an iPhone app development agency, you can be assured that they provide long-term support to your application.

This support can help you unlock features that are part of your application but are hidden during the development process.

One such example would be to add different currencies to your payment merchant. During the process, the requirement may only be to charge customers in USD but the app might be inherently capable to support multiple other currency forms simultaneously as well.

This scalability is already present in the framework and can be unlocked if you reach out to the app development firm that you hired for the development of your application.

Even when an app development firm delivers the final app to the client, they always continue to monitor its performance.

This allows them to analyze the apps strengths and weaknesses and to learn from the use cases available to them. In case the app’s performance is mind-blowing, they will analyze what exactly did they do right to get such a result, the innovation that helped them achieve it, and how to replicate similar performance elsewhere?

Customers most often don’t focus on the inner workings of the development firm they hired for building their app. And that’s where they miss perhaps one of the most significant parts that make timely and high quality development possible i.e. SOPs or Standard Operating Procedures.

Development firms have to deal with so many projects at the same time that without the process being well defined, they wouldn’t be able to complete their commitments on time.

Tekrevol is also one such firm that has managed to pull off hundreds of projects related to iOS apps despite having a very small, resource bound team. They knew that they would be headed towards the path that leads to closure if they are not tactful with how they perform the tasks given to them. And step by step, they developed their processes and made their development cycle so well built that every single project handed over to them ended up getting completed before time and with lesser costs.

Does this Clear Up Your Questions About iPhone App Development Companies?

iPhone Application development is a complex undertaking involving a lot of technical aspects that clients don't understand much about. However, knowledge about these internal working mechanisms is necessary if you really want to zero in on the best agency you can hand over your project's responsibility to. 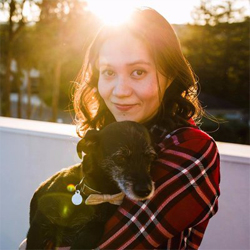 Jane Collen is a creative content writer and digital marketer at TekRevol. She works closely with B2C and B2B businesses providing blog writing, video script writing, ghostwriting, copywriting and social media marketing services. I have worked on too many sites which are related to Tech, travel, health, education, and fitness.