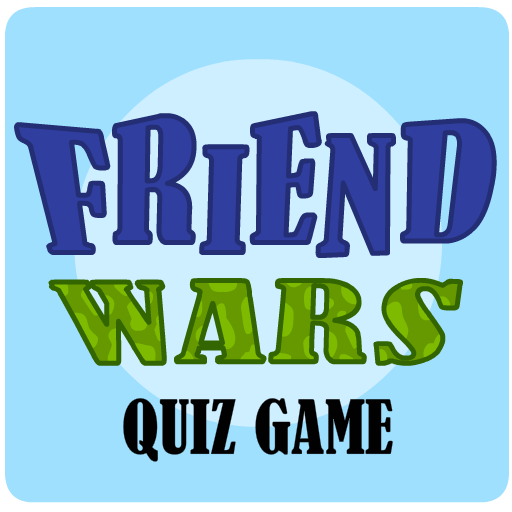 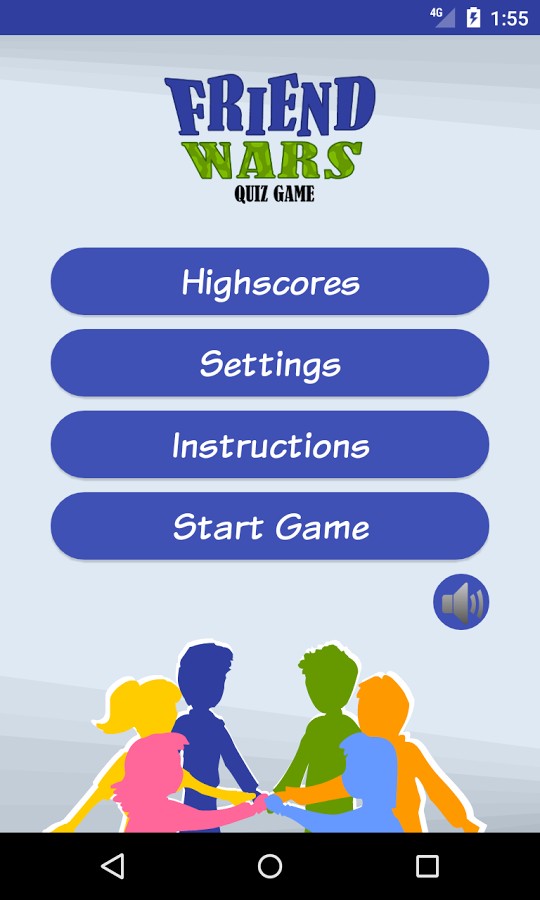 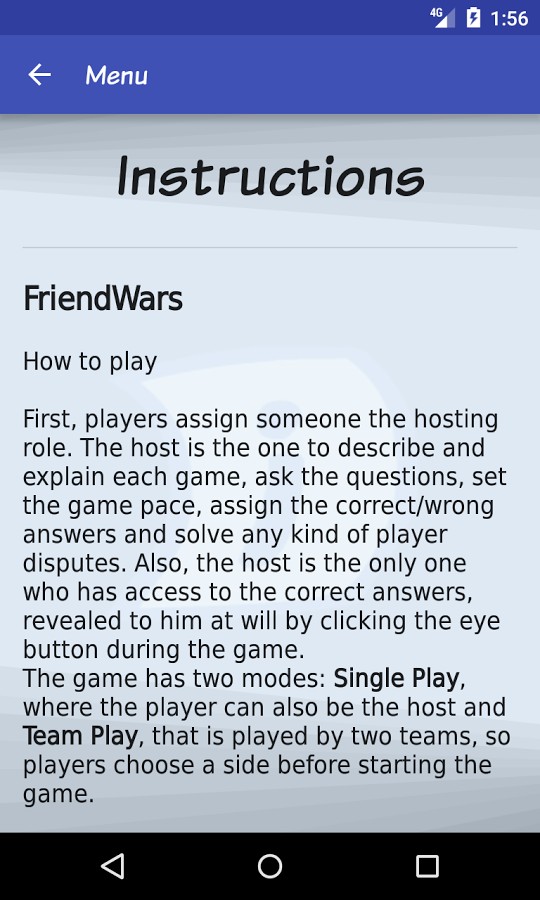 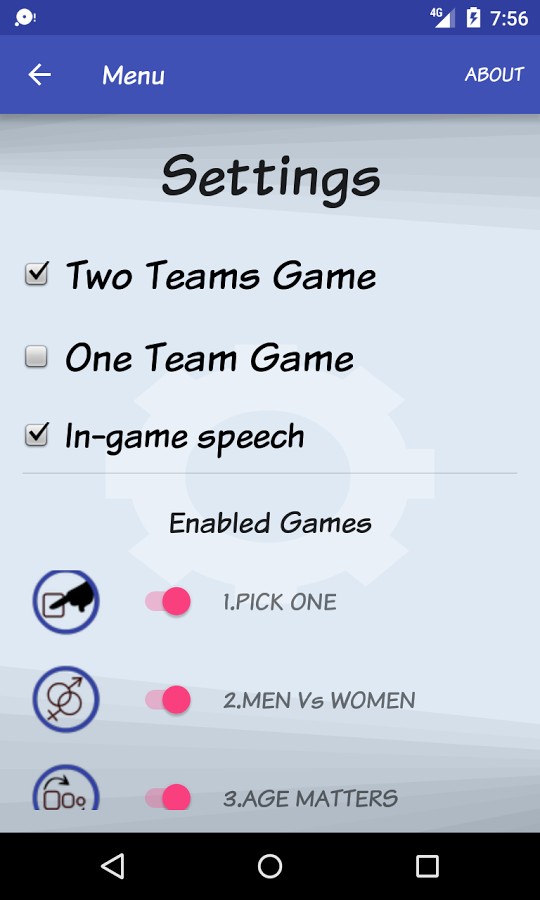 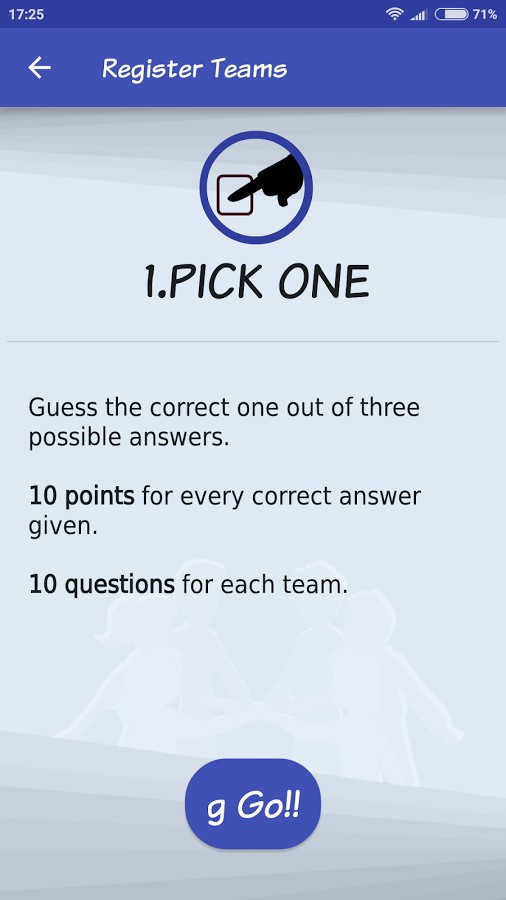 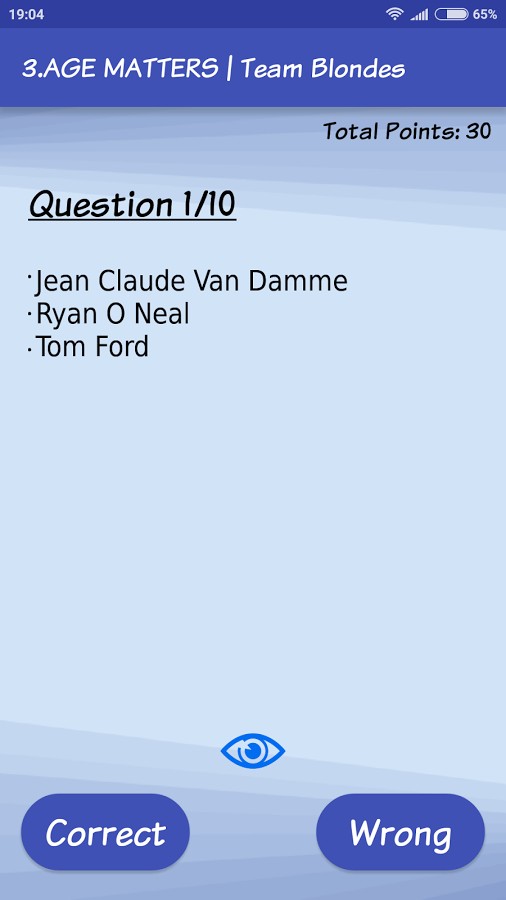 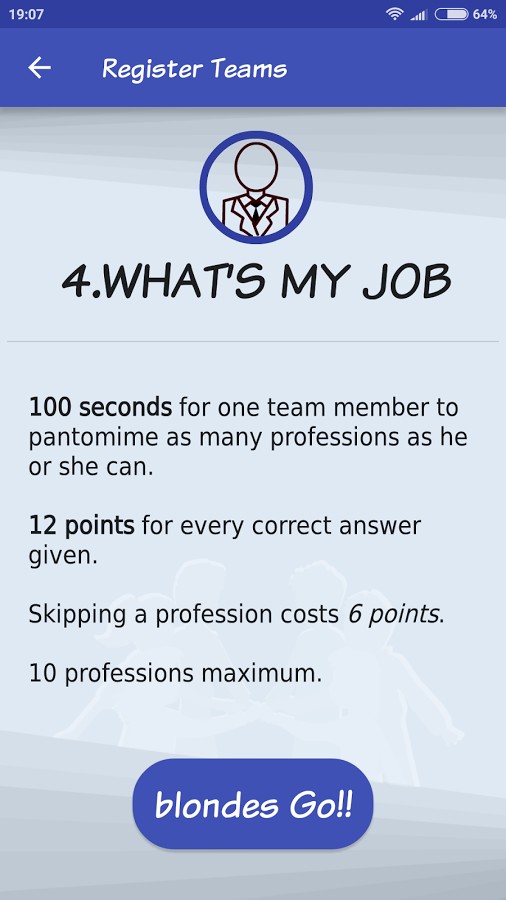 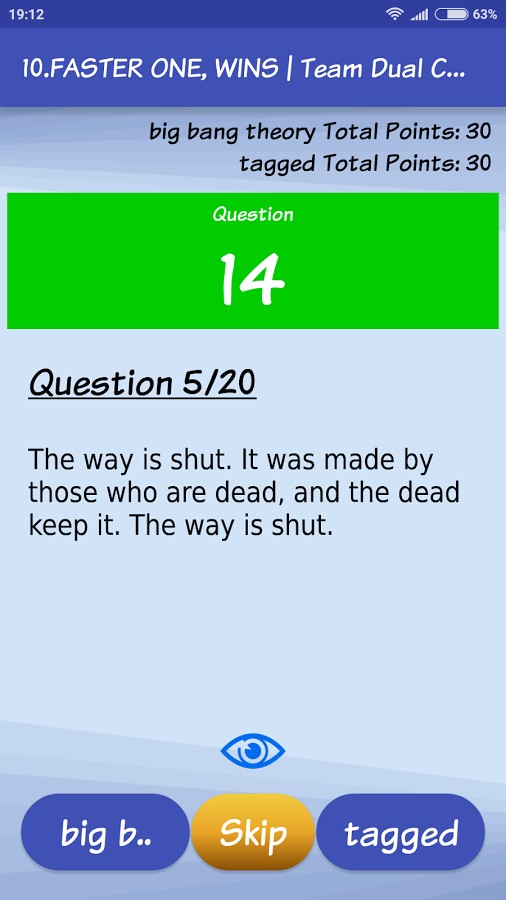 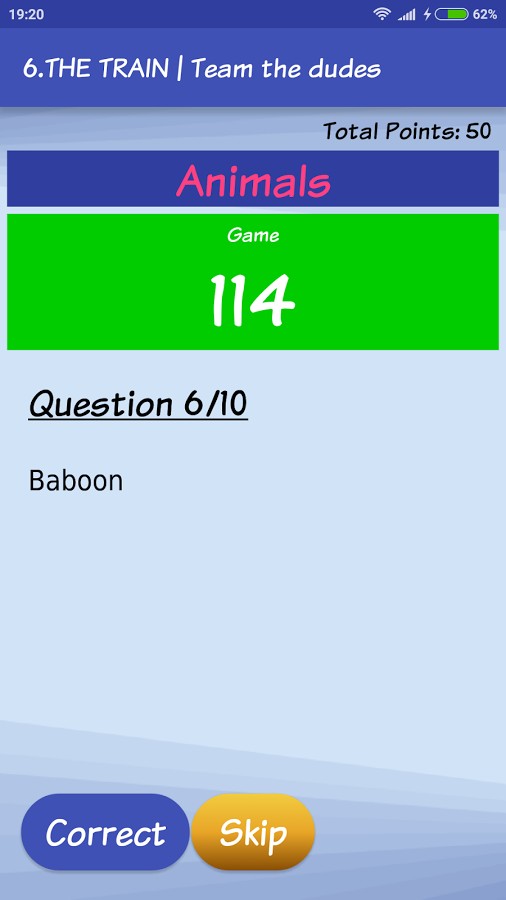 How to play
First, players assign someone the hosting role. The host is the one to describe and explain each game, ask the questions, set the game pace, assign the correct/wrong answers and solve any kind of player disputes. Also, the host is the only one who has access to the correct answers, revealed to him at will by clicking the eye button during the game.
The game has two modes: One Team Game, played between the members of one team with a separate host and Two Teams Game that is played by two teams, so players choose a side before starting the game.
Friend Wars actually consists of different game types: trivia, pantomime, singing imitation, word quiz etc. This way players may decide, before a match starts, which games they want to play out of ten different ones, in order for them to have the best of fun.
Every single game has its own rules, so players must be informed about them before it starts.
Team with most points, wins the game.
There are 10 selectable games in Friend Wars.


1.Pick One
Is a simple quiz game, where 3 answers are given for each question. 10 questions for each team, 10 points for every correct answer.


2.Men Vs Women
Is another trivia game, with 10 random questions, 5 male-type and 5 female-type for each team. 10 questions for each team, 10 points for every correct answer.


3.Age Matters
Is a game where 3 celebrity names appear and the team must place them in the right order from oldest to youngest. 15 points for every correct song, 10 rounds maximum.


4.What\'s my Job
Is another pantomime game, where a player describes as many occupations as possible within 100 seconds. 12 points for every correct occupation, 6 points lost for a skip. A limit of 10 professions maximum applies.


5.Four-Word the Movie
In this game, each team assigns a player, who must describe a movie using 4 words only. Team has to give only one answer for each described movie within 40 seconds. 15 points will be applied for every correct answer, -8 for a wrong one. Skipping a movie costs no points. 10 movies available for each team.


6.Train
During this game, a random theme pops up for each team, and 10 theme-related words appear. Each team assigns a player who must describe those words within 120 seconds. 10 points for every correct answer given, no penalty applies for a skip. 10 words maximum.


7.Not Another Synonym
In this game, a team player describes a word using just 3 others. The teammate who gets it right, swaps his place with the one who made the description. Faster the right answer, more the points applied. 15 points maximum for a successful play, 8 points penalty for skipping a word. 25 seconds for each word available, 10 words in total.


8.Do me Nah
Is a singing game, during which a team player has to sing as many songs as possible within 100 seconds, using the "na" only sound. Rest of the team has 20 seconds per song to get it right and win 20 points. Multiple answers can be given, but failure to get it right (even by skipping), costs 12 points. 10 songs maximum.


9.Find Me
During this game every team has 120 seconds to describe as many words as possible. The assigned player who describes the words, must has his back turned to his teammates. Each round, words have the same starting letter. 15 for a successful play, 8 points penalty for a skip. 15 seconds time limit for each word, 20 words in total.


10.Faster One, Wins
Is the last round, where both teams play during the same time. Host reads a famous quote/dialogue from a movie, and first one who gets the movie right, gets the points too! 20 quotes, 15 points for each correct answer.