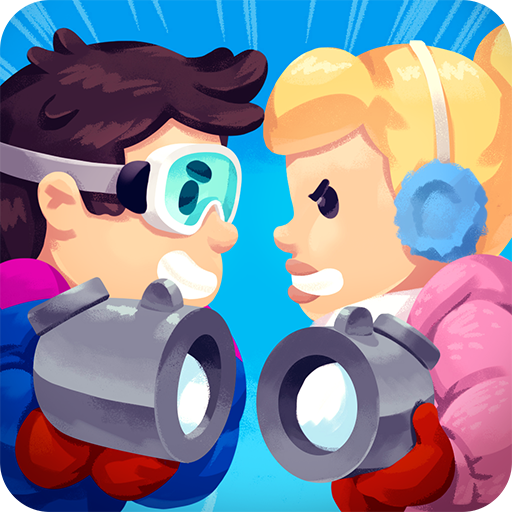 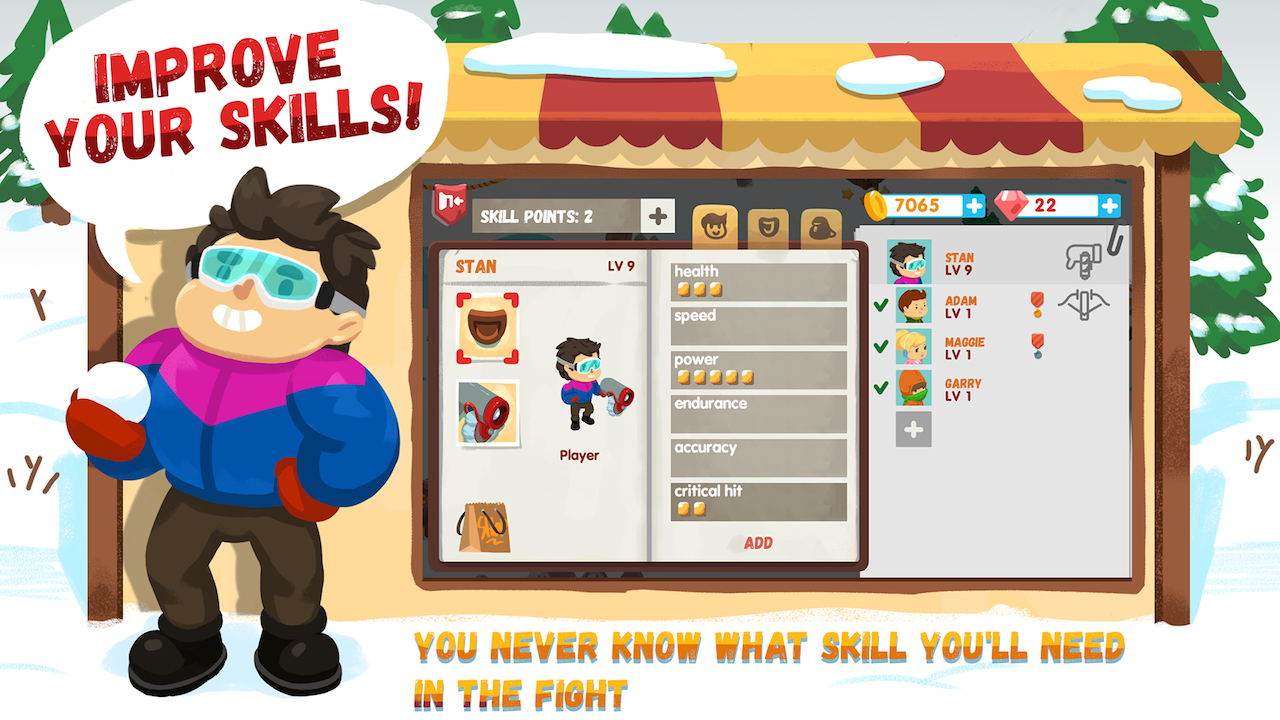 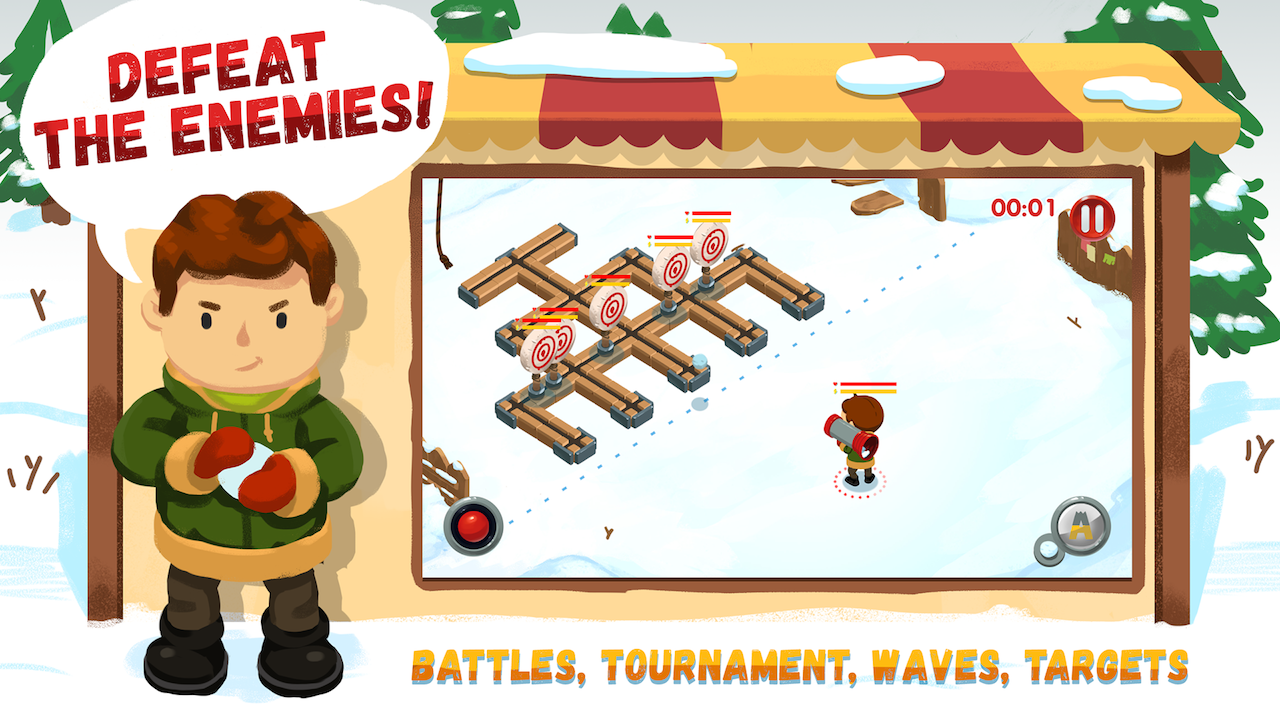 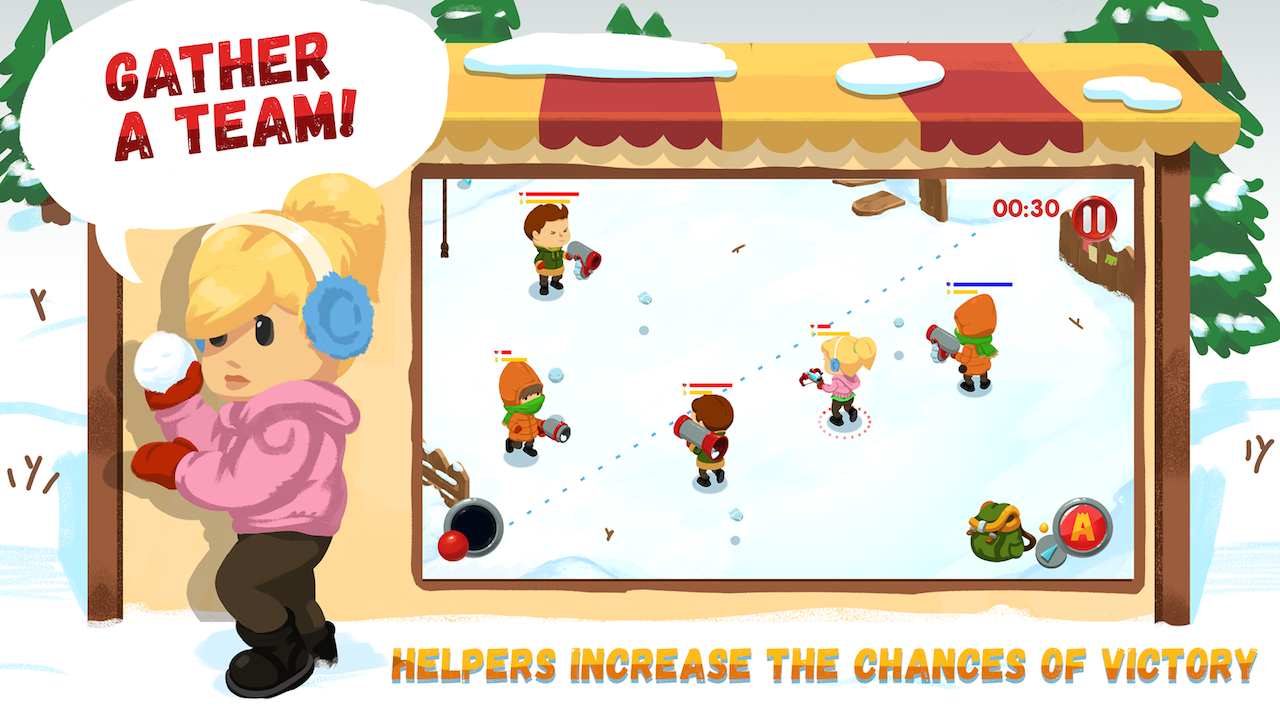 The Snowy Valley is a distant fairytale place covered with eternal snows. The inhabitants of the Valley are snowicks and they are just glad with snow. As they are young at heart by nature, energetic, inventive as well as just great inventors and dreamers, they are constantly playing snowballs and they like this activity so much that it has already turn into real competitions. The main snowball tournament takes place in the Ice Castle but not everyone can participate in it. To win the tournament, a team of snowicks should take part in small battles, improve their skills and collect stars. Every snowick wants to win the Ice Castle tournament therefore they invent various types of snow weapons that help them defeating other participants.

******
In our play you can select a protagonist out of 4 characters. Each character has an additional bonus improving one of his/her skills.
- Jack thinks he is a team leader because he ate too much jam in his childhood and now during snow plays he gets ill and catches a cold less frequently than other snowicks. He gets the Health bonus.
- Tommy is the youngest snowick but his restlessness and excitement allows him being the fastest in the team. He gets the Speed bonus.
- Stan is the strongest and enduring snowick in the team. When other snowicks are already tired of snow plays, Stan is still making snowmen and destroys everything around. He gets two bonuses at once: the Power Bonus to increase damages from his snowballs and the Endurance Bonus to slowly consume energy.
- As any girl, Cinthy doesn't like wetting her mittens in the snow. But if she happens to get a snow blower, any snowick will get in trouble. She gets the Accuracy Bonus to increase damages from her weapon.

******
To vary the snow fights, there are several variants of competitions between teams in the game:

Ordinary fight
This is the most usual fight variant. Your team will play against the opposing team. The winner is the team that has the last snowick left.

Targets
Enemies are the standing or moving targets. Also there are bonus levels where targets move along more complicated routes making it difficult to hit the targets. The player wins only when (s)he hits all the targets.

Waves
This is a type of competition where a player has to fight against several teams that will appear one after another starting from two teams.

Tournament
Several teams take part in this type of competition. The fights take place in turn; each team competes with all other teams.

******
Thank you for choosing and playing our game! We will constantly add changes and new features to the game captivating you with the world of snowicks and snow fights. But this will be difficult without your support!

Play, leave positive comments, join our communities and help us make the game even more interesting and better!