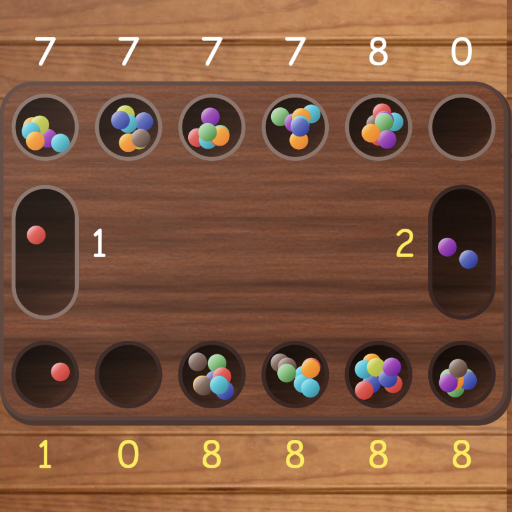 The mancala games are a family of two-player turn-based strategy board games played with small stones, beans, or seeds and rows of holes or pits in the earth, a board or other playing surface. The objective is usually to capture all or some set of the opponent's pieces. (Wikipedia).

There are a lot of games in the mancala family: oware, bao, omweso and so on.

It's an implementation of several mancala games - kalah, oware, congkak.

The game provides a board and a number of seeds or counters. The board has 6 small pits, called houses, on each side; and a big pit, called an end zone or store, at each end. The object of the game is to capture more seeds than one's opponent.

1. At the beginning of the game, four (five to six) seeds are placed in each house.
2. Each player controls the six houses and their seeds on the player's side of the board. The player's score is the number of seeds in the store to their right.
3. Players take turns sowing their seeds. On a turn, the player removes all seeds from one of the houses under their control. Moving counter-clockwise, the player drops one seed in each house in turn, including the player's own store but not their opponent's.
4. If the last sown seed lands in an empty house owned by the player, and the opposite house contains seeds, both the last seed and the opposite seeds are captured and placed into the player's store.
5. If the last sown seed lands in the player's store, the player gets an additional move. There is no limit on the number of moves a player can make in their turn.
6. When one player no longer has any seeds in any of their houses, the game ends. The other player moves all remaining seeds to their store, and the player with the most seeds in their store wins.

1. At the beginning of the game, four (five or six) seeds are placed in each house. Each player controls the six houses and their seeds on the player's side of the board. The player's score is the number of seeds in the store to their right.

2. On his/her turn the player removes all seeds from one of his/her hous, and distributes them, dropping one in each house counter-clockwise from this house, in a process called sowing. Seeds are not distributed into the end scoring houses, nor into the house drawn from. The starting house is always left empty; if it contained 12 (or more) seeds, it is skipped, and the twelfth seed is placed in the next house.

3. Capturing occurs only when a player brings the count of an opponent's house to exactly two or three with the final seed he sowed in that turn. This always captures the seeds in the corresponding house, and possibly more: If the previous-to-last seed also brought an opponent's house to two or three, these are captured as well, and so on until a house is reached which does not contain two or three seeds or does not belong to the opponent. The captured seeds are placed in the player's scoring house.