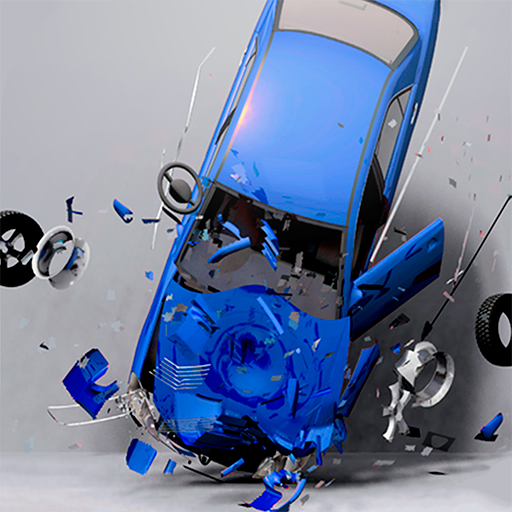 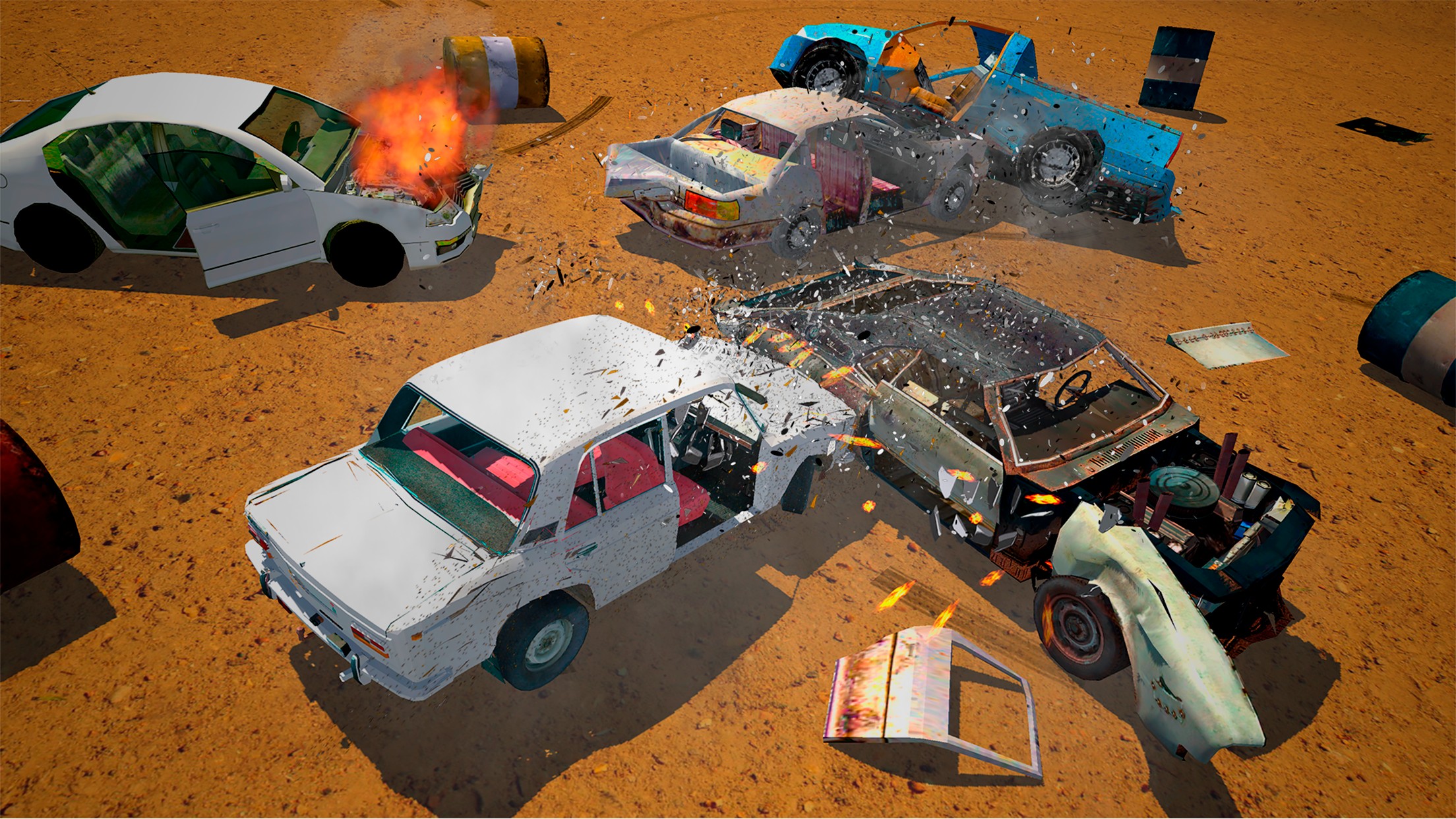 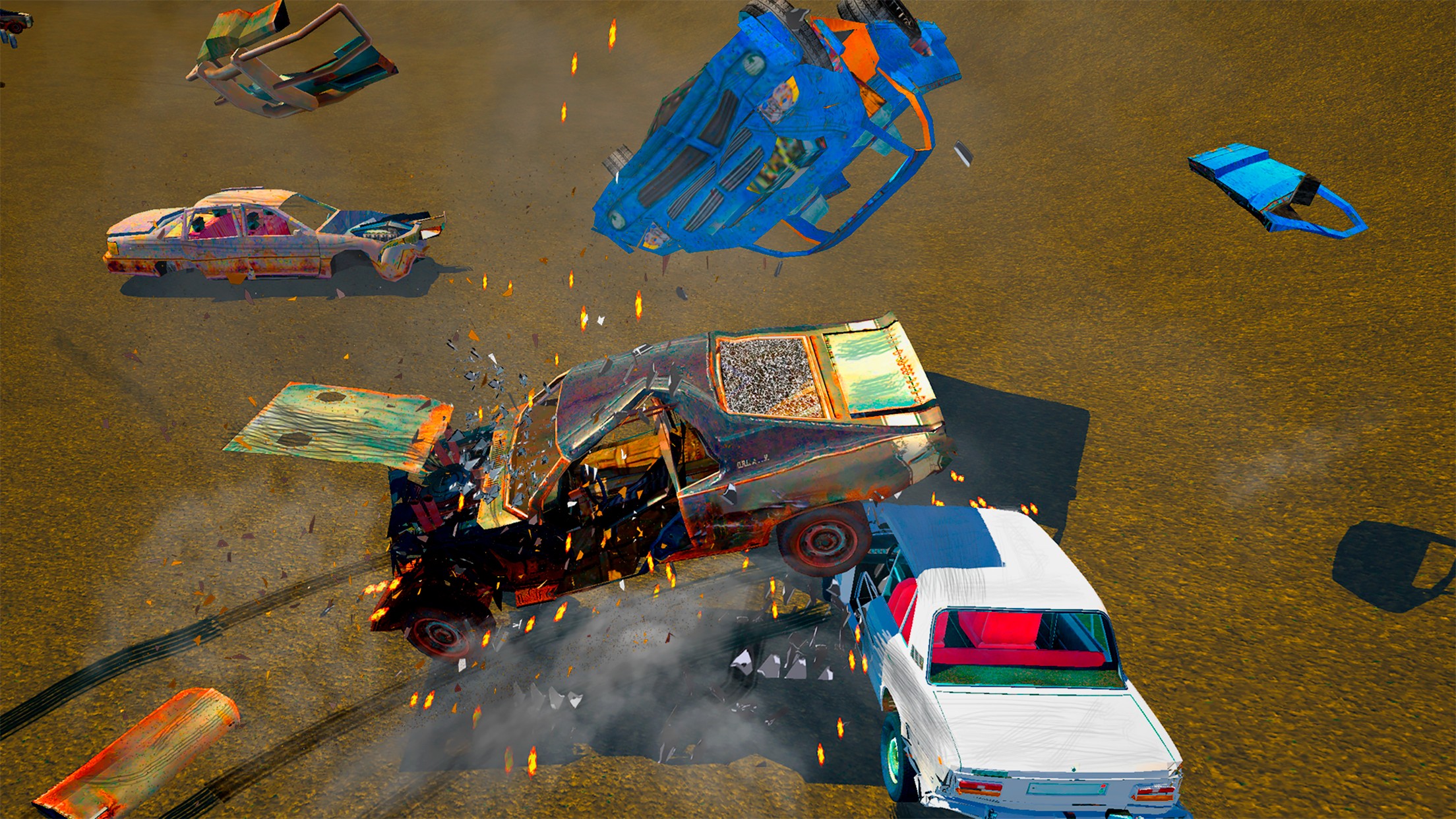 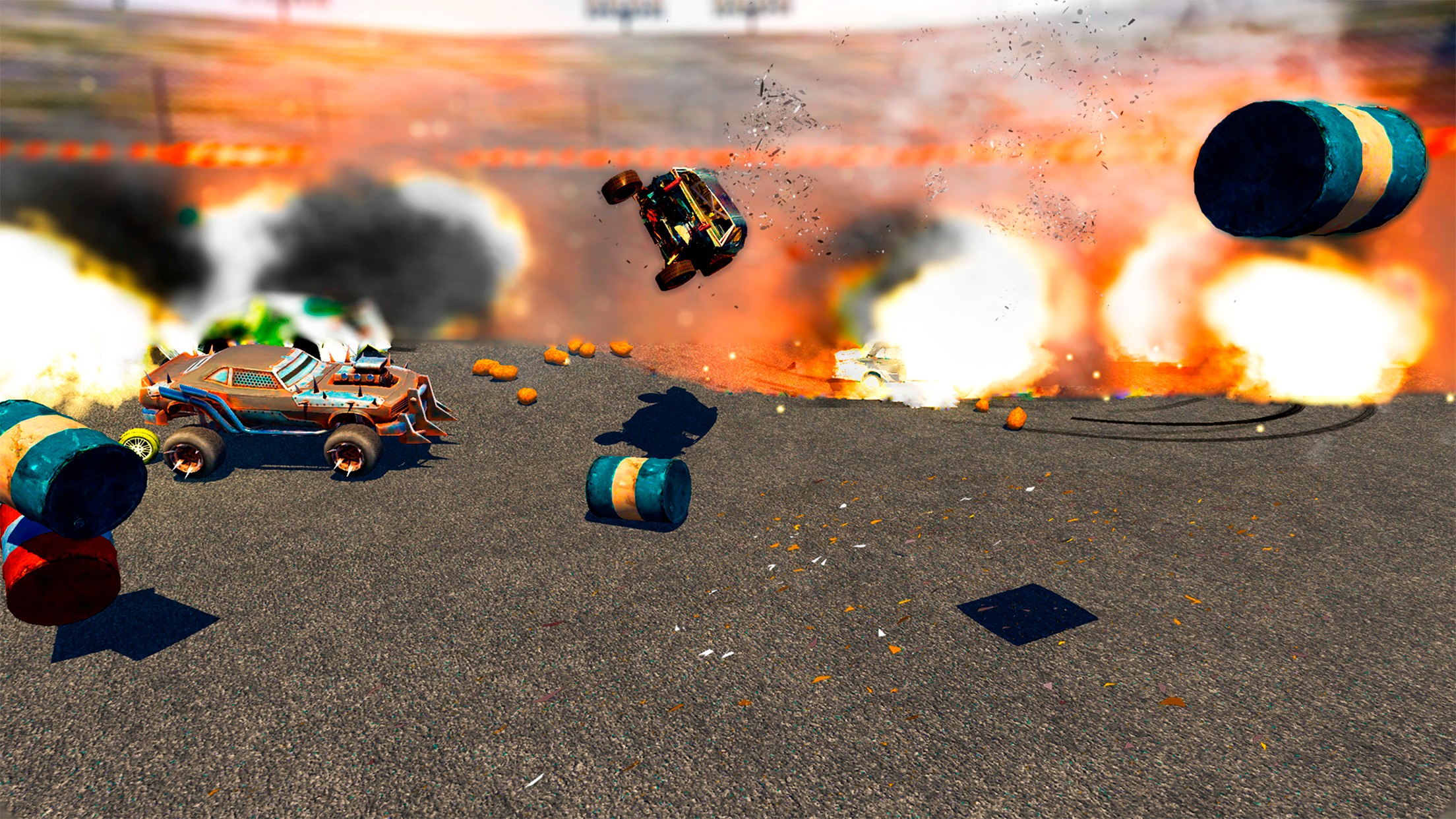 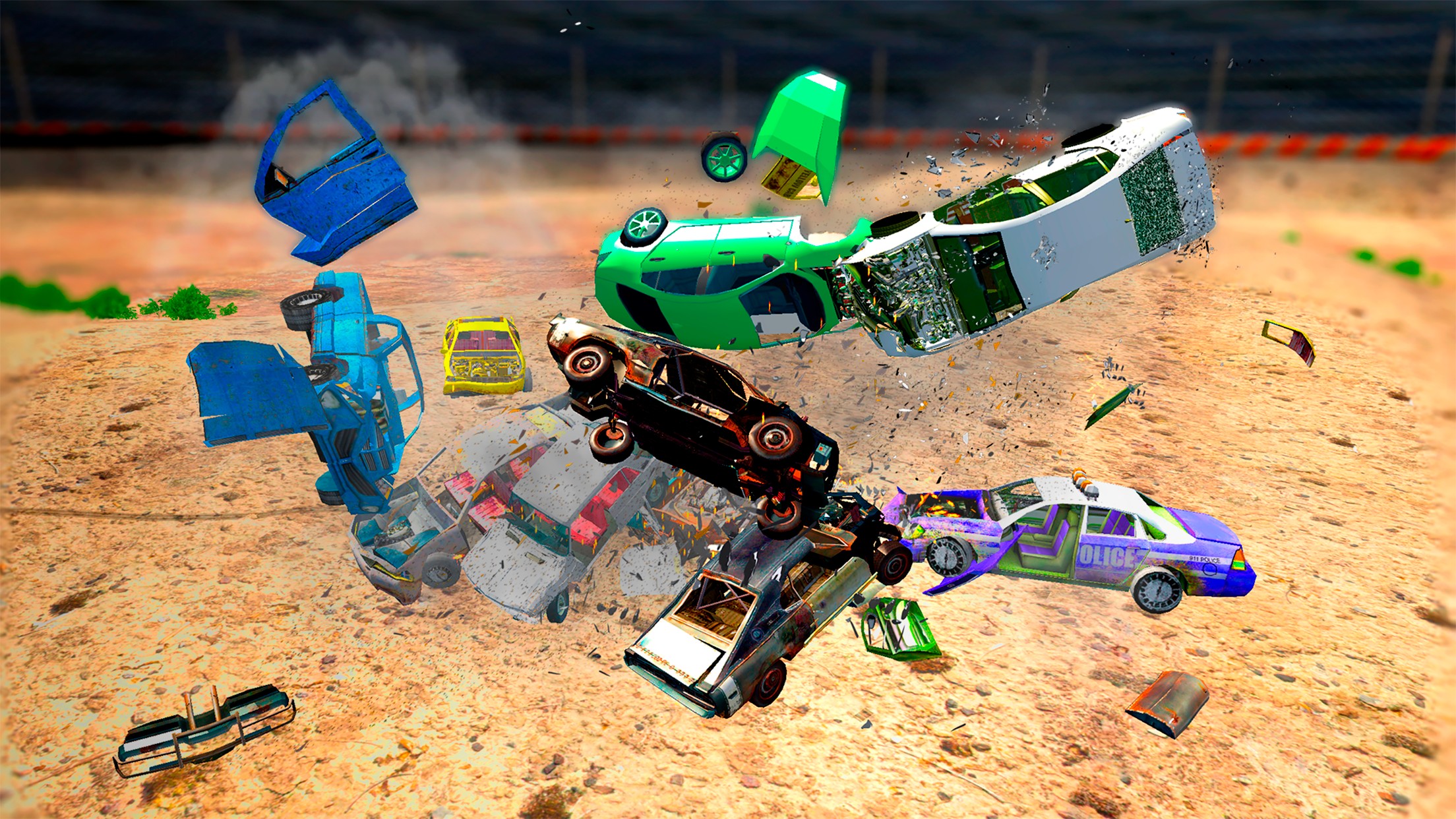 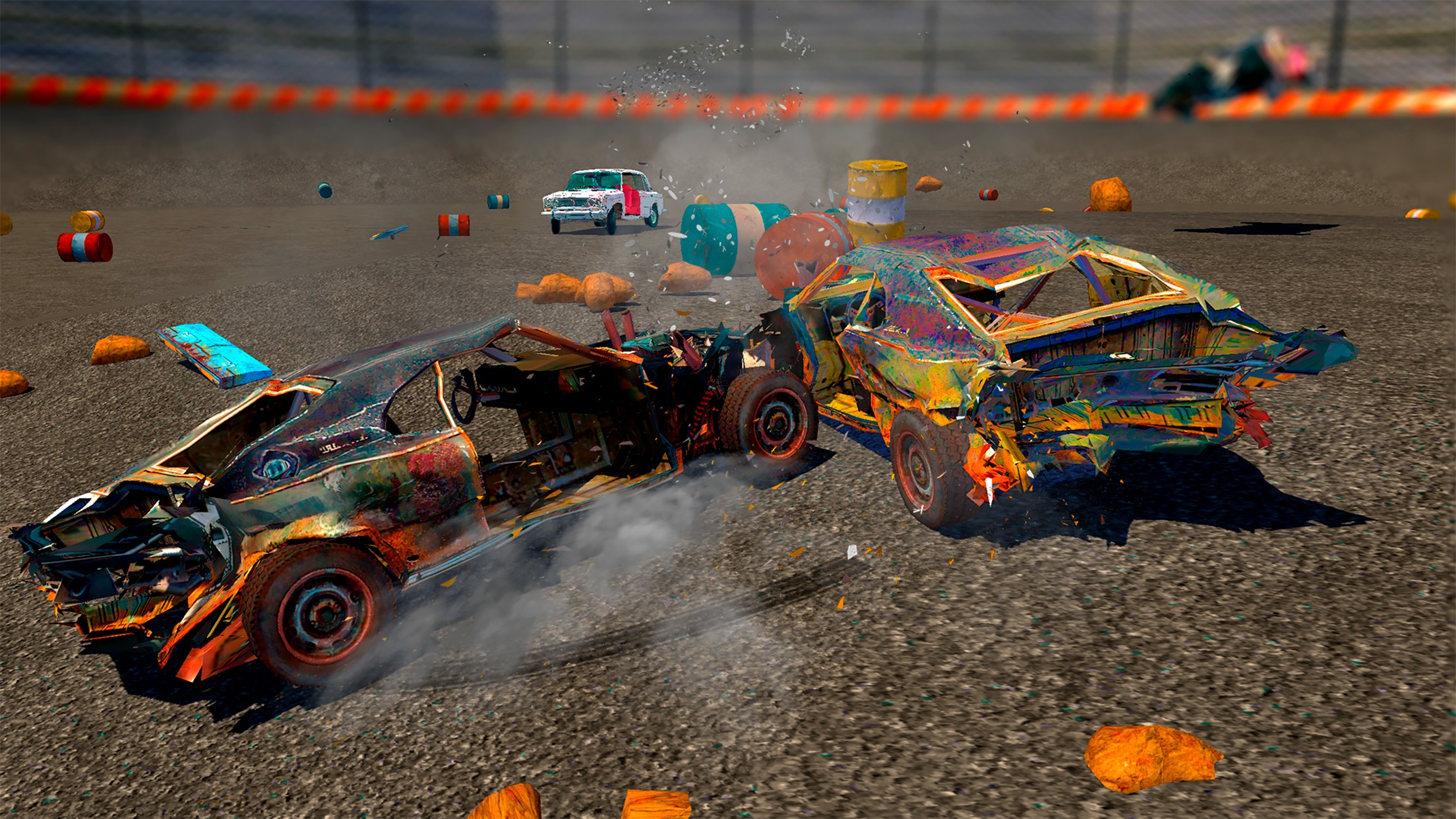 Add your favorite car!
Write your favorite vehicles in comments and we will add them in the next update!
One of the most addictive and entertaining physics based derby games ever made! And it's free! 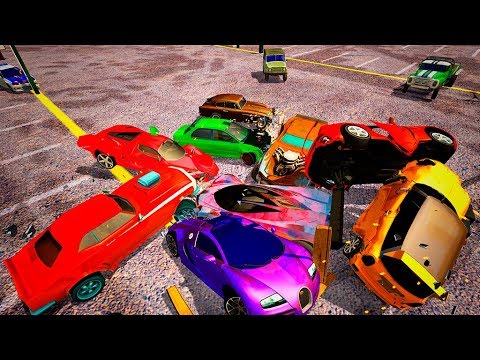 Uncontrollable battles
Quickly take the car and go to smash! Let's see if you can survive the most deadly smash field! Challenge your car driving skills in the most dangerous whirlpool demolition derby game ever to be on the rampage. Drive your awesome vehicle and thrash your opponents to pieces. It’s time for chaos inside the whirlpool of metal pieces demolition derby turf.
Get ready for the ultimate arcade racer! How long can you survive the arena? Smell the petrol fumes and enjoy the carnage!

The smell of burning and victory
The engines are roaring, the dust is seeping in through the car windows, and you don’t even have time to put on your seat belt before it’s time to go! Your objective... wreak as much enemies as possible.
Derby Destruction Simulator is adrenaline-filled muscle car racing game with damage, realistic physics and beautiful graphics, innovative game play mechanics and good fun!

Play, destroy, conquer and dominate
Choose from various cars and tracks and hit the Play button to instantly play against demolition derby rivals. Easy to play, but buckle up and fasten your seat belts as you smash your way to victory and become the next big demolition derby champion. Bang and smash the wannabe competition in this next generation racing game experience!
Get ready to destroy your opponents in demolition derbies that will offer you the thrill of a lifetime. Destruction has never felt so real as you see doors and other car parts smash of your car.

Your Demolition Derby drivers career
You are now one of the proud owners of your own derby racing car with a driving permit to join the derby events! The voyage is long with many challenges ahead as opponents all over the world will soon test your driving skills. Building your own driving style is key to find what best works vs. your adversaries; do you choose to become a smart driver who waits for its prey at the moment of truth, or are you the dare devil that goes for an all out combat approach to knockout and annihilate its rivals. May the best driver win!

Advices and Tips
This game does not only offer a fun demolition derby experience, but it is also a quite realistic simulator that offers real destruction and wreckage simulation as the buses crash against each other; furthermore the game brings very realistic vehicle physics making the driving experience feel very authentic. So to become a pro you need to make sure you take some time to practice as a high speed car driver and experiment with the controls. Once you know how to drive your car, truck or bus then it's time to learn how to ram and smash your rivals the right way. Also note that well placed and timed attacks can get your opponents car to rollover which will leave them as a sitting duck for you to crash into a pile of debris. Watch out for head-on collisions as these have high impact on the health of both you and your rivals.

Install! Play! And become a demolition derby Champion!
This is next car game & beam-ng styled game.

Derby Destruction Simulator will be updated regularly. Don't forget to leave a review with your feedback.